Can operating systems indicate the well-being of the nation? Head of ďGemius BelarusĒ Mikhail Doroshevich discusses the idea.

Belarus has the youngest Internet community among all the other Central and Eastern European states.

Euroradio: What has changed in a year?

Darashevich: A lot. There were 4 million 339 thousand Internet users in Belarus in August 2012, there were 3 million 803 thousands a year ago. Half a million in six months is a lot.

More people have started using the Internet every day. The number has increased from 73.44% to 80.71%. 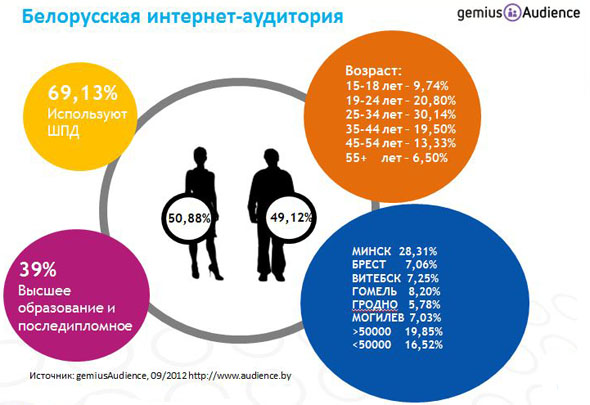 Euroradio: Why is the increase bigger if compared to our neighbouring states? Was it really bad before and have we finally started catching up?

Darashevich: This is a good hypothesis. Our Internet has never been cheap. The Internet in our neighbouring states is still better and cheaper. For example, you can have 100Mb for 10 euro in Moldova.

Euroradio: How many people have started using the mobile Internet?

Win7 may finally leave Windows ’– behind this year. It indicates that the majority of users have old PCs.

Google is still not as popular as Yandex. Facebook is not a leader either. Vkontakte and Ondoklassniki are very popular.